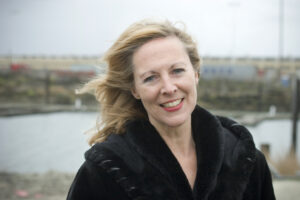 Jazz singer and jazz artist-in-residence Melanie O’Reilly presents the fourth programme in her Jazz Appreciation Series. Introducing the journey of the jazz movement called the Swing Era with a fascinating picture of the inspirational singers and bandleaders who were at the core of a unique and innovative period of jazz history, during the time from 1935 to 1947.

Big bands were in abundance during one of the most popular and exciting times of the 20th century in America, and bandleaders such as Duke Ellington, Count Basie, Benny Goodman were huge stars at a time when music not only gave huge entertainment but also great solace to the population during the years of the great depression.  The singers of these big bands who were a vital and integral part of the Swing movement added to the bands’ popularity with the audiences of the time, such as Ella Fitzgerald, Sarah Vaughan, Billie Holiday, Billy Eckstine, Carmen McRae, Mel Torme, Dinah Washington, Frank Sinatra, Anita O Day, Doris Day, and more.

Melanie’s talk-presentation which also provides the background context to her show at the Wexford Arts Centre, on 28th Oct, when she celebrates the story of one of these iconic singers, Anita O’Day.

Melanie’s Jazz Artist-in-Residency is supported by the Irish Arts Council .

Melanie O’Reilly is an internationally-known jazz performer, singer, songwriter and music educator. She has recorded seven albums and performed on eight compilations.

She has performed at several international festivals, including representing Ireland at the European Union International Jazz Festival at Schoenberg Hall, Los Angeles, the National Concert Hall Dublin, the San Francisco’s Black Cat Club and her Tribute to Anita O’Day show earned her four-star reviews at the Edinburgh Festival.

She is a regular performer on radio and TV and is the creator and host of the award-winning RTÉ 1 radio show Jazz on the Bay.  Melanie has extensive experience teaching jazz voice, as well as vocal and performance technique. She is currently teaching jazz vocals ensemble at Waltons New School of Music Dublin and has taught at the California Oakland School of the Arts, the New College of California in San Francisco and University of California Berkeley’s CAL Extension programme, among others.  She also teaches at the California Jazz Conservatory as part of their World Music Vocal programme and was a Visiting Scholar and Musician-in-Residence at UC Berkeley’s Celtic Studies programme from 2003 to 2009.  Melanie has taught at Waltons New School “The Art & Craft of Song writing ” workshop since 2004.    She was recently musician Artist in Residence in La Mue Residency in Normandy France and her Celtic Jazz Ensemble represented Wexford and Ireland at the European Heritage Festival last Sept in Normandy, where she and her musicians were “Guests of Honour”.    Melanie also was creator and host of the award-winning radio series “Jazz on the Bay” on RTE Radio 1, which featured many jazz legends such as Dave Brubeck, Chick Corea, Wayne Shorter, McCoy Tyner, Bobby McFerrin, Nancy Wilson and more.  She and her trio recently were chosen as one of the groups to represent Wexford for Culture Night 2021.    She is currently Jazz Musician-in-Residence at the Wexford Arts Centre, where she also recently premiered her jazz show Tribute to Anita O’Day and her ongoing Jazz Appreciation Series currently reaches out to education and community.

This website uses cookies to improve your experience while you navigate through the website. Out of these, the cookies that are categorized as necessary are stored on your browser as they are essential for the working of basic functionalities of the website. We also use third-party cookies that help us analyze and understand how you use this website. These cookies will be stored in your browser only with your consent. You also have the option to opt-out of these cookies. But opting out of some of these cookies may affect your browsing experience.
Necessary Always Enabled
Necessary cookies are absolutely essential for the website to function properly. This category only includes cookies that ensures basic functionalities and security features of the website. These cookies do not store any personal information.
Non-necessary
Any cookies that may not be particularly necessary for the website to function and is used specifically to collect user personal data via analytics, ads, other embedded contents are termed as non-necessary cookies. It is mandatory to procure user consent prior to running these cookies on your website.
SAVE & ACCEPT